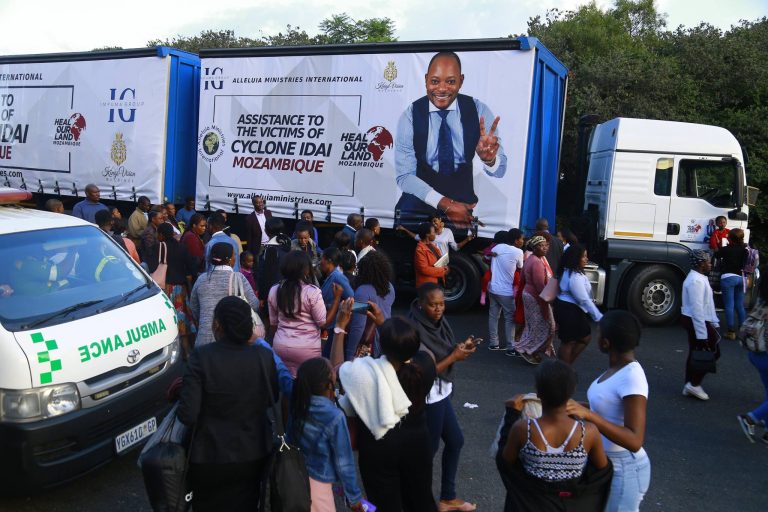 The AL Foundation and our partners, we extended a helping hand to the survivors of Cyclone Idai in Mozambique as we always do for any other victims of natural disasters. According to the Word of God, faith without works is no faith at all. (James 2:14-17).

In line with the HEAL OUR LAND march which took place on the 27th October 2018 in Sandton, Johannesburg, South Africa, where we called on God to heal the land of Mozambique and other affected countries.

The Church of God consistently offered prayers for every family affected by Cyclone Idai while we mobilized support for Cyclone Idai survivors in Mozambique in the form of helpers [volunteers], close to 70 tons of clothing, food, and medical supplies.

According to humanitarian workers hundreds of rural communities were plunged into a food crisis after Cyclone Idai tore through central Mozambique on March 14. The government estimated that more than 700,000 hectares of agricultural land was flooded, leaving many farmers with nothing to harvest. More than 60 of our members and representatives travelled to be of assistance to the Mozambican victims. Moreover, we made more than R1 million available in aid to get the needed medical and food supplies to the survivors and help Mozambique get through the challenging time.

Help us be better prepared to natural disasters: click here to be part of the good Samaritans.

We use cookies on our website to give you the most relevant experience by remembering your preferences and repeat visits. By clicking “Accept All”, you consent to the use of ALL the cookies. However, you may visit "Cookie Settings" to provide a controlled consent.
Cookie SettingsAccept All
Manage consent

This website uses cookies to improve your experience while you navigate through the website. Out of these, the cookies that are categorized as necessary are stored on your browser as they are essential for the working of basic functionalities of the website. We also use third-party cookies that help us analyze and understand how you use this website. These cookies will be stored in your browser only with your consent. You also have the option to opt-out of these cookies. But opting out of some of these cookies may affect your browsing experience.
Necessary Always Enabled
Necessary cookies are absolutely essential for the website to function properly. These cookies ensure basic functionalities and security features of the website, anonymously.
Functional
Functional cookies help to perform certain functionalities like sharing the content of the website on social media platforms, collect feedbacks, and other third-party features.
Performance
Performance cookies are used to understand and analyze the key performance indexes of the website which helps in delivering a better user experience for the visitors.
Analytics
Analytical cookies are used to understand how visitors interact with the website. These cookies help provide information on metrics the number of visitors, bounce rate, traffic source, etc.
Advertisement
Advertisement cookies are used to provide visitors with relevant ads and marketing campaigns. These cookies track visitors across websites and collect information to provide customized ads.
Others
Other uncategorized cookies are those that are being analyzed and have not been classified into a category as yet.
SAVE & ACCEPT
Powered by